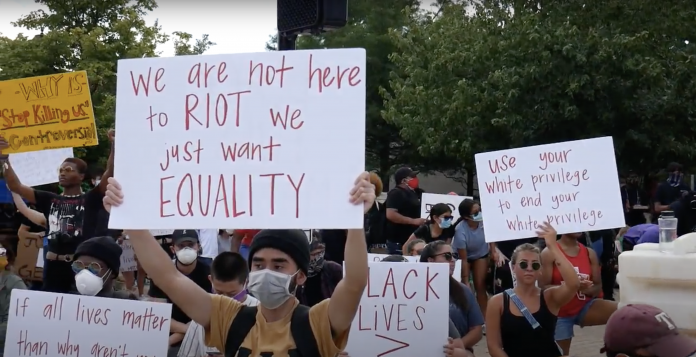 For two evenings in a row, peaceful protestors gathered in front of the city hall to cry out for justice for George Floyd. The tragic Minneapolis event has sparked protests across the country and even far beyond our own borders into the United Kingdom, Japan, Australia, and more. The demonstrations are comprised of protestors desperate for the end of racism, injustice, and police brutality.

Tuesday afternoon a crowd began to assemble across the street from city hall equipped with signs sharing messages like “black lives matter”, “say his name”, and  “excuse your privilege”. Members of the crowd pass out water bottles and snacks while others speak words of encouragement to those sharing the moments of solidarity and frustration by their side.

As Tuesday evening encroached, protestors mobilized and walked through the UTA campus. Arlington and UTA police closely followed the demonstration as roads were blocked to ensure the safety of the protestors. Moments of mutual respect were shared as an Arlington police officer stepped down from his motorcycle to take a knee alongside the crowd. As the heartwarming moment happened others in the crowd held signs that served as a reminder of the death of Christian Taylor, an unarmed 19-year old college athlete killed by an Arlington police officer during a burglary investigation. The investigation was deemed to have a  “catastrophic outcome” by former Police Chief Will Johnson. Even the American Dream City couldn’t avoid the midst of police shootings of unarmed black men.

Protestors gathered around a speaker who encouraged the crowd to voice their opinion at the voting booth. Voter registration cards circulated the crowd as protestors sat and listened to speakers throughout the demonstration. With more young people than ever voicing their political beliefs on social media, progressive leaders are banking on a demographic shift in local elections. According to the Texas Secretary of State, only a quarter of the 16 million registered voters in Texas cast their votes in the 2020 primary. It’s projected that by 2022, one in three voters in Texas will be under 30.

Around 8pm most of the crowd had dispersed. Destinee Franks and Lisa Escalante, some of the last protestors of the evening, stood in front of the star statues at the Arlington PD headquarters. When asked about their affiliation with Black Lives Matter Franks responds “our kids are black”. The sisters raise their signs and explain “This is our entire family right here. We are a multi-race family”.  As we continued our conversation passerby’s honked in support as they drove down Abram Street.

Monday night, an agitator group looted from Arlington businesses and vandalized that same star statue. A group marched towards the Walmart located at 915 W. Randol Mill Road late in the evening. Of the four people arrested in the incident, only one was an Arlington resident. Later the same night, the First Cash Pawn located at 2916 S. Cooper St. was broken into. The arrest of a Duncanville resident with a felony warrant from Dallas county followed the burglary. In response to the looting and vandalism, Franks says “It’s just not the way to go. We want peace everywhere. We don’t want violence. We have to do this peacefully. We want to do this the right way”. Jaime Ayala, interim police chief, said his department will continue supporting peaceful protests, but will not tolerate others who detract from the message by acting out criminal activity.

Peaceful assemblies are planned to continue in Arlington throughout the week. Big Sammy, a local rapper and organizer of the first protest in Arlington, is staging a march for 4pm Thursday, June 6th at Stovall Park. Prior to the march, a community discussion is planned.