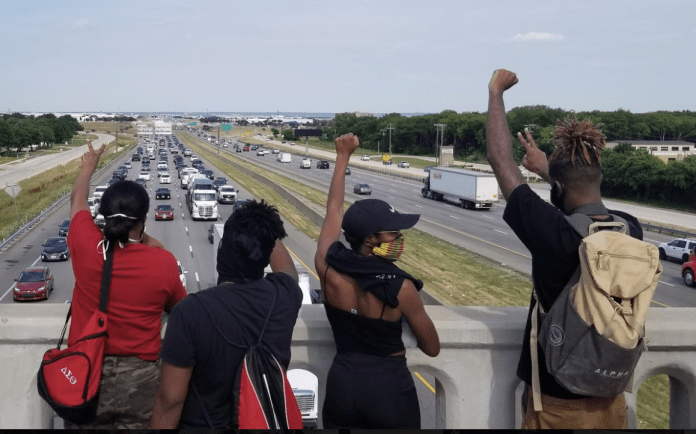 The events that transpired about a week ago that resulted in the murder of a black Minneapolis man in the hands of a white police officer shook the world. The incident in Minneapolis seems to follow a continuing trend of black people being killed in police encounters. Inspired by demonstrations in surrounding cities, an Arlington artist called upon her social following Monday afternoon to create the first protest the city has seen.

On Monday afternoon, protestors gathered to demand justice following the death of George Floyd. Peaceful protestors occupied the bridge on South Center St. and I-20 next to the popular Arlington Highlands. As residents enjoy a patio lunch with their families at Plucker’s and Chuy’s, not far away protestors chant “I can’t breathe” while holding signs in support of the Black Lives Matter movement. Arlington police blocked off the bridge and guided traffic as protestors shared their messages with rush hour traffic below. Passerby’s honked and held their fists out of their windows in support of the protest.

Local Arlington Rapper Big Sammy, the organizer of the event, expressed the desire for her city to start a protest of its own as surrounding cities begin to do the same. When seeking support from her close friends for organizing a protest in the American Dream City, Sammy

explains their negative reactions, but then goes on to say  “What does that say about our city? Our city has seen police brutality. Christian Taylor was one of those examples and we’re just out here because everybody needs to know that it doesn’t matter where we are we are not exempt”. This would be the first of many demonstrations in Arlington throughout the day. “I am somebody that can use their voice. This was put together today,” she boasts.  “I organized this in one morning and look at how many people are here. That’s why we’re here to make our voice heard.” As traffic slows, honks blare from down below, and the crowd’s cheers continue to grow, the local artist goes on to explain “If somebody didn’t think about it before they are going to think about it once they pass this bridge”.

When asked about the looting and the safety of businesses nearby in the Highlands and Parks Mall she says “I had to let them know (Arlington PD) and I had to let the people on this bridge know that’s not what we are here for”.  As she eagerly runs back to the crowd she leaves with the message “positivity, that’s what is going to help”.

With little time and preparation, the protest attracted hundreds to join in peacefully expressing anger, frustration, and solidarity during this turbulent time. This protest is the first of many for Arlington created awareness and sparked conversations around police brutality and the equal treatment of black people in America for the community.