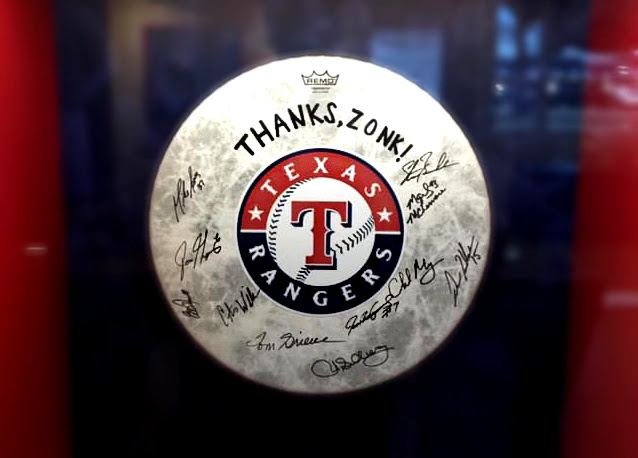 John Lanzillo, known among the Rangers fans as Zonk, in the company of his son was present two weeks ago in Section 13 at Globe Life Park about an hour before the first pitch.

Zonk, as usual, had his drum with him, just as he did back on April 11, 1994, when the stadium was still called The Arlington Ballpark.

Zonk, now 85 and proudly wearing his white Rangers jersey with the name “Zonk” on the back, beat his drum before the start of the game joking that the guy in front of him was going to regret sitting in that seat once play started.

Tens of thousands of people came that Thursday, March 28, to see their favorite baseball team play the Chicago Cubs opening the last season on the ballpark. The ballpark has been a destination for Arlington residents and neighbors for 25 years, and after this season the Rangers will move to Globe Life Field.

Most of the people at the Thursday game have heard the drumming of Zonk behind the Rangers dugout, which for years has served a great end of quickening the pulse of fans and elevating the spirits of the team. For the past three decades, Zonk has been there for his team through all the good and bad. He has and has made many amazing memories, but unfortunately, some of them are starting to fade.

“We’ve been dealing with Alzheimer’s with my dad,” said his son, John Lanzillo, who is the third in line with the same name. “He used to drive me to the games, and now I drive him,’’ said John. “He used to take me for a haircut, now I take him.”

Since he was 65, the disease slowed Zonk down and began to change him, but he still shows up every day to work at his family business. Until the late 2000s he made every home game and listened to the play-by-play on the radio when the Rangers were playing out of town.

Zonk started to play the drum at games when, one day, the mascot—who was his friend—did not show up to a game. So Zonk took the drum. Every year, he gets a new drum and passes down his old one to a friend. Bobby Valentine, the former Rangers manager, has three or four drums hung on the walls of his old Arlington restaurant.

Thursday afternoon, Zonk drummed on the last Opening Day in the old stadium with a capacity of more than 49,000. Soon, the stadium will be replaced by a smaller one with a retractable roof.